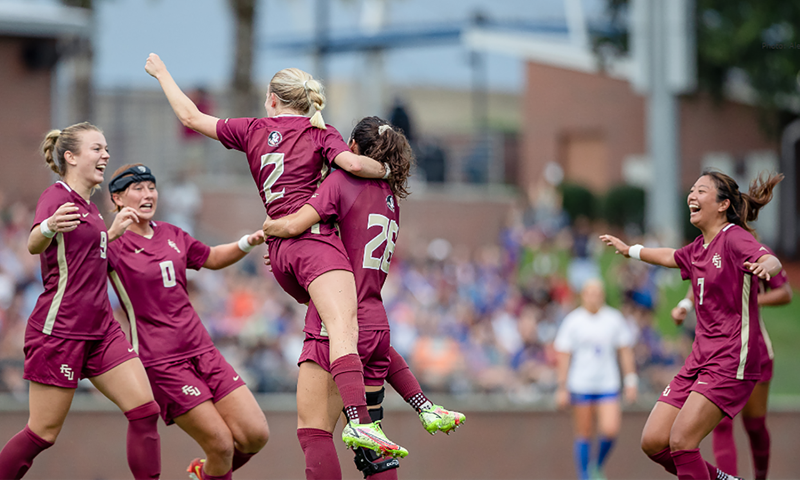 get complete details of This Week in ACC Women’s Soccer

GREENSBORO, North Carolina (theACC.com) – ACC women’s soccer moves into the second week of conference play this week with the first weekend of two play dates, with seven games scheduled for Thursday and Sunday.

Seven ACC teams are ranked this week in the United Soccer Coaches poll, the most schools of any conference.

• Florida State and Virginia are two of the remaining 20 teams nationally (of 337) that have yet to lose a game this season.

• ACC teams have almost quadrupled their non-conference opponents in the score, 246-69.

• Echegini scored his first career hat-trick with three goals against Boston College in FSU’s 6-0 win over the Eagles. He scored the first hat-trick for a Seminole since the 2017 season.

• White played all 90 minutes at center back as Clemson recorded a clean sheet in a 2-0 home win over No. 6 Notre Dame on Thursday, handing the Fighting Irish their first loss and shutout of the season. He also recorded assists on both of Clemson’s goals.

• The current ACC membership has combined for 27 NCAA championships. UNC owns 21 NCAA titles and FSU three, while Notre Dame won three before joining the league in 2013.

• Three ACC head coaches rank in the top five in NCAA Division I for most wins by an active head coach. Longtime UNC head coach Anson Dorrance leads the way with 908 wins. Virginia’s Steve Swanson is fourth with 459, while Pitt’s Randy Waldrum is fifth with 439 career wins from him. Duke’s Robbie Church ranks 13th among active coaches with 365 career wins by him, while Wake Forest’s Tony da Luz ranks 16th (336).

• Nine ACC teams were selected for the 2021 NCAA Championship, the most of any league.

• ACC teams have made 55 College Cup appearances, the most of any conference (next closest conference is the Pac-12 with 28 appearances). The current membership has combined for 67 appearances.

See also  Fashion: Back to the streets | Fashion

• The ACC has had a Women’s College Cup team in 39 of the last 40 NCAA Tournaments and in each of the last 16 years.