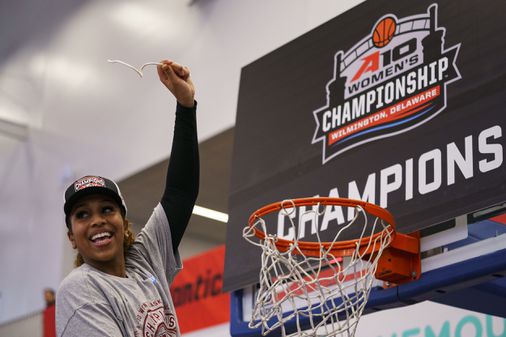 Among those goals: capturing an Atlantic 10 regular season title, repeating as tournament champions and winning the program’s first NCAA Tournament game. Verdi also wants to see his team break into the top 25 nationally, a benchmark that would cement UMass’ rise in his seven-year tenure.

The Minutewomen certainly have the pieces; Most of last season’s roster return, including the top six scorers and all members of the “wild seven.”

“That is the core of our success,” Verdi said. “So it’s great to have them back for another year, because when you look through the trajectory of doing the [A-10] final and lose the championship game [in 2020-21], I think that set us up to win it last year. So just having that experience helps us.”

The latest sports headlines from the Globe are delivered to your inbox every morning.

Within that core reigns A-10 Player of the Year, Sam Breen. The 6-foot-1 graduate student forward was a sure shot for preseason Player of the Year after averaging a double-double last season. Breen tied a career high with 31 points in Monday’s season-opening 72-57 victory against Central Connecticut State.

“When she leaves the program, she will be the best player that has ever played here at the University of Massachusetts,” Verdi said.

Dynamic guard Sydney Taylor joined Breen on the preseason A-10 first team, and Destiney Philoxy landed on the second team. Despite that stable core, the Minutewomen were still looking for additions to the roster, in particular transfer forwards Piath Gabriel and Laila Fair.

Gabriel is a significant addition as a 6-5 junior who played two seasons at powerhouse UConn. The sister of Los Angeles Lakers forward Wenyen Gabriel, Piath will not only increase the depth of the frontcourt, because for Verdi, bringing in a player from UConn symbolizes the growing recruiting appeal at Amherst.

“When I first took this job, we had no respect, we received no respect,” Verdi said. “Here there was no tradition, there is no history here, they have never won, so it was very difficult to recruit because people were not interested in sending their children or their players to our program. It was below ground zero. We build it. The foundations were built.”

Verdi believes the defense has room to improve, adding that junior guard Ber’Nyah Mayo is a standout player to watch. He is also reminding himself to savor what could be another special season.

“It’s going to take some time,” he said. “We have to get the chemistry right. But I’ll be honest with you: I like who we are right now.”

Other Division 1 stories from around the state:

BC turns to youth

Boston College is embarking on a massive makeover under the direction of fifth-year coach Joanna Bernabei-McNamee. The Eagles lost their top three minute earners in Cam Swartz (traded to Georgia Tech), Taylor Soule (to Virginia Tech) and Marnelle Garraud (to Vanderbilt), and were left without a senior or graduate for this season.

BC has its youth to lean on in the high-octane Atlantic Coast Conference. That starts with sophomore center Maria Gakdeng, who led all freshmen in the nation with 73 blocks last season. Dorchester native Taina Mair, the 2021-22 Gatorade Massachusetts Player of the Year at Brooks, is poised to get big minutes at point guard. She put up 9 points, 13 assists and 7 steals in BC’s season opener, an 81-53 win over UMass Lowell.

Boston University sits atop the Patriot League preseason poll with 16 of 20 first-place votes. Senior guard Sydney Johnson earned preseason Player of the Year honors and senior center Maren Durant was named preseason Defensive Player of the Year. Both are listed to lead the team under second-year coach Melissa Graves.

Holy Cross may have lost 2021-22 conference Player of the Year Avery LaBarbera (traded to Wisconsin), but the Crusaders still got two first-place votes and placed third in the preseason poll. Bronagh Power-Cassidy, a junior point guard from Dublin, scored 19 points Monday in a 67-39 win against Merrimack.

A year of firsts and seconds

Stonehill makes the jump to Division 1 this season. Trisha Brown has won more than 400 games with the Skyhawks and enters her 22nd season as head coach. Chelmsford’s Emily Bramanti is the leading scorer (13.6 points per game) as a grad student shooting guard.

At Harvard, freshman coach Carrie Moore hopes to carry on the legacy of retired legend Kathy Delaney-Smith. Moore was most recently an assistant at Michigan and part of the Wolverines’ Elite Eight tournament last season.

Along with Graves at BU, Denise King (UMass Lowell) and Bridgette Mitchell (Northeastern) embark on their second season as head coaches. Northeastern posted a 66-65 road win against BU on Monday on 24 points from Arizona transfer shooting guard Derin Erdogan.