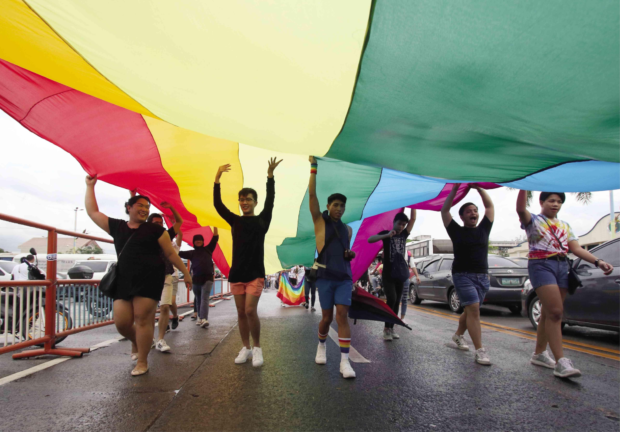 FILE PHOTO: Members of the LGBT community show their true colors with gusto at this 2018 Gay Pride March at the Marikina Sports Complex in the city of Marikina. FILE PHOTO/RICHARD A. REYES

The call was made after the UNHRC conducted its Universal Periodic Review (UPR) of the Philippines on November 14. This is the fourth time the council has conducted the UPR for the Philippines, with the first, second and third UPR underway. in 2008, 2012 and 2017, respectively.

During the UPR, member states develop recommendations for adoption by the Philippine government. These recommendations are intended to guide action to address human rights issues.

The Philippines UPR received a total of nine recommendations and two comments on the rights of LGBTQIA+ people from the governments of Argentina, Belgium, Chile, the Czech Republic, Finland, Iceland, Ireland, Sweden, the United States of America, and Mexico.

“—Accelerate the efforts to approve the law on sexual orientation, gender identity and expression and the comprehensive law against discrimination”, said the Ambassador of Mexico when presenting these recommendations.

Meanwhile, 13 LGBTQIA+ organizations in the Philippines jointly prepared and provided a report on the situation of LGBTQIA+ human rights.

He pointed to the failed attempts to pass national legislation, despite previous UPR recommendations that were also specific to sexual orientation, gender identity and expression, and sex characteristics (SOGIESC), on anti-discrimination laws as one of the critical concerns for LGBTQIA+ rights.

See also  4 ways to protect your money from the recession, according to a financial planner

In addition, he also noted that, as of yet, the Philippines still does not have comprehensive anti-discrimination legislation to protect LGBTQIA+ Filipinos.

This is despite the fact that in the 2017 UPR report, the Philippines already received two specific SOGIESC-related human rights recommendations from Australia and Mexico.

“Through the UPR, we hope that a dialogue can be generated to encourage the government to engage and take clear steps towards an inclusive SOGIESC society. In the absence of redress mechanisms, we value the UPR as a venue to raise key concerns, including the decades-long delay in passing inclusive SOGIESC anti-discrimination legislation, the ongoing social stigma that denies transgender and queer students access to education, and the red tagging of LGBTQIA+ activists,” he said.

“Young people around the world are fighting for equality and inclusion. We know that the fight for equality transcends generations: to honor those who fought before us and to protect the next generation from violence and hate. We continue to affirm that LGBTQIA+ rights are basic human rights,” said Vince Liban, National Coordinator for Pantay.

“The inclusion of the Philippines LGBTQIA+ situation in the UPR will not only be a prudent step, but a huge step forward for our dream as queer Filipinos to be recognised, seen and reclaimed our rightful place in the world,” he said. additional.

Bayan criticizes government report on human rights to the UN

The UN is not fooled by the rhetoric of the PH government on the situation of human resources: groups

Hontiveros promises to promote the SOGIE bill: “We will take this to the end”