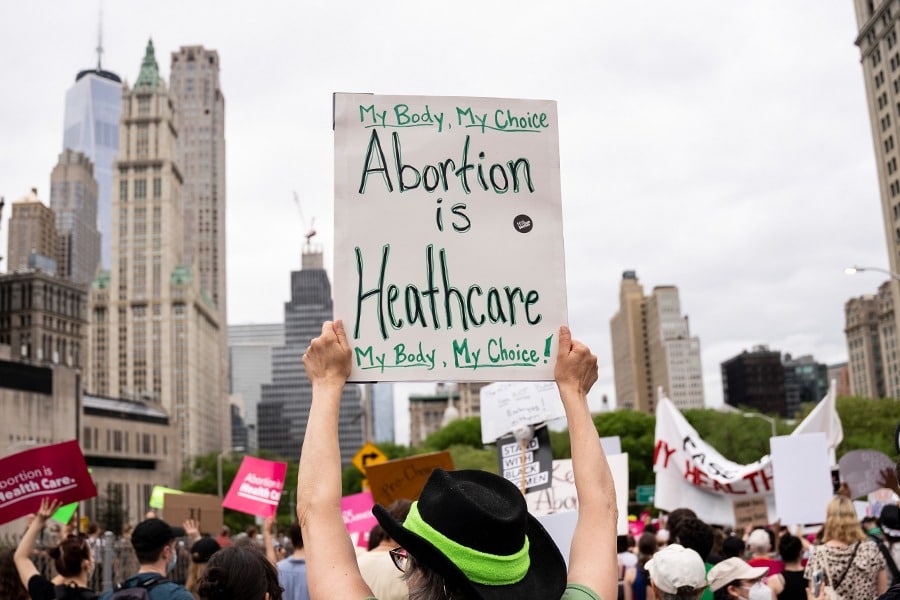 know about UPS Teamsters take up the fight for abortion rights

At the recent general meeting of Teamsters Local 804 members in July, UPS rank-and-file workers spoke out for justice. Angelique Dawkins of the Local 804 Women’s Committee took the microphone and gave an emotional speech denouncing the attack on reproductive rights, pointing out that restrictions on abortion will disproportionately harm working class people like her daughter. As the Women’s Committee statement noted:

“However, the consequences of this ruling go far beyond women’s bodily autonomy. The Supreme Court cited the anti-union Janus decision to justify overturning earlier precedent and has signaled the intent to further erode civil liberties such as the right to contraception and same-sex marriage. We are kidding ourselves if we don’t think they will come after for the basic labor rights of workers.”

Dawkins, a UPS driver from the Foster Avenue building in Brooklyn, noted that “an injury to one is an injury to all.” He urged the Teamsters to “commit to mobilizing any interested member to defend our civil rights and democracy.” As the statement was read, many members of the Women’s Committee stepped up to the microphone to show their support, and the speech received a standing ovation from many of the 175 people in the room.

Shortly thereafter, Teamster Ben Douglass of the Metro Queens facility took the floor in support of the Women’s Caucus statement. He noted that it is time for Local 804 and the entire Teamsters union to take a stand in defense of their own members and the working class in general who will be victimized by anti-abortion laws. “Activation laws” have already gone into effect in at least 8 states, he noted, and that led to a 10-year-old rape victim having to cross state lines to get an abortion.

He urged Local 804 to follow the example of Teamsters Local 210, which represents 9,000 New Yorkers, in demanding that reproductive health care be “safe, accessible, and legal.” Grassroots workers also distributed a user information urging union members to join the fight for reproductive rights.

Teamsters must put up an effective fight for reproductive rights

This grassroots response to this attack on reproductive rights must be heard by the union leadership at large. Now is the time to mobilize for our right to abortion and take the discussion within the union and within our workplaces. Drivers and warehouse workers face long hours every day, the inequalities of the dual system, low wages in the case of part-time workers, harassment from employers and unsafe working conditions due to the heat wave of the summer and the terrible cold in the winter. Our queer women and co-workers also have to deal with all those issues, all while also experiencing discrimination. Opening the conversation and organizing the fight for abortion rights would strengthen the union, especially our most oppressed members, to raise their demands and fight for them.

The attack on reproductive rights is also an attack on our ability to work, which is why reproductive rights are actually workers’ rights. The right to parenting is not only about deciding when to have a baby or not, but also about having working conditions that allow us to enjoy parenthood and give our children a childhood worth living: without poverty, with all the services, education, recreation and opportunities they need and deserve. The fight for abortion rights is a way to connect the entire Teamsters union, to unite across racial lines, across labor divisions, and to unite drivers and warehouse workers.

It is crucial that our union leaders encourage and fully support initiatives that promote abortion rights. We need our leaders to broadcast them through their union media, for example, and provide spaces and meetings where workers can have open conversations about the oppression we face, and where we can decide together how best to organize to defend our rights. reproductive. But despite Roe v. Wade was overruled, and nearly every level of Teamster leadership has yet to react accordingly to this historic attack, an attack that could directly affect the union’s trans and female workforce.

It is imperative that the voice of the members of the women’s committee and other grassroots members of our union be heard and that we mobilize so that the Teamster leadership as a whole assumes the defense of our right to abortion.

Our fight goes beyond the workplace

The Teamsters remain an important bastion of the working class. They have 1.2 million members, 35% of whom are women. At UPS alone, there are 350,000 members, in a workplace where contracts are due to expire in a year and workers are bracing for what could be the largest US strike in decades.

After years of paybacks, we have an opportunity to put up a real fight against UPS bosses, include rank-and-file members in negotiations, and reverse years of concessions. This will not be possible if the base of our union, both drivers and storekeepers, do not take this fight into our own hands. We need the broadest democracy within our union and we need an empowered base to succeed.

Now is an exciting time to be a Teamster, particularly at UPS. The rapidly expanding and increasingly multiracial workforce brings workers from around the world into daily contact and has the potential to infuse the American labor movement with militant traditions from Latin America, the Caribbean and beyond. Many black workers in New York and their families, for example, supported or were part of the Black Lives Matter Movement. UPS workers rode through the pandemic as frontline workers, risking their lives as the bosses made billions and developed class hatred.

It is true that, nationally, about 50% of the truckers who voted voted for Trump. However, a growing percentage of the union are immigrants or children of immigrants who are less receptive to xenophobic calls and more open to discussions of social change, social justice and even socialism.

Too often, union leaders will use conservative sections of the union as an excuse not to advocate for abortion access or broader equality issues. It is true that any union with more than a million members will reflect the social, political and cultural divisions in society. We need to stop sweeping these divisions under the rug. Instead, we must show that the struggles are working class problems.

Many UPS workers will be forced to travel to get an abortion. What will be our union’s response to a situation like this? We must not allow our union brothers to solve this alone, without support. We need to become an example for the organized and unorganized workers movement, showing how the working class must fight for our rights inside and outside the workplace.

As socialists too, our goal must be to build the maximum fighting unit in the fight against the boss, encouraging each worker to get involved, speak their minds and prepare for a great class battle. The divisions currently existing within the workforce only weaken our solidarity against the boss.

The class struggle in the economic sphere, such as for a better contract, is important. And yet the fight for bread and butter profits is always profoundly limited in scope, and needs be expanded to include issues of gender and racial oppression, for example. Through these struggles, large numbers of currently apathetic union members could be brought into political life, especially if our union took up a real fight against racism, sexism and xenophobia.

As Karl Marx said, the class struggle is the driving force of history. If a third of a million UPS workers go on strike next year, our fight will leave its mark on the world. It’s a fight worth getting into. And the fight for social equality—for women, LGBTQ people, black and brown workers, and everyone else—is key to uniting our forces and fighting for real and lasting change in society.