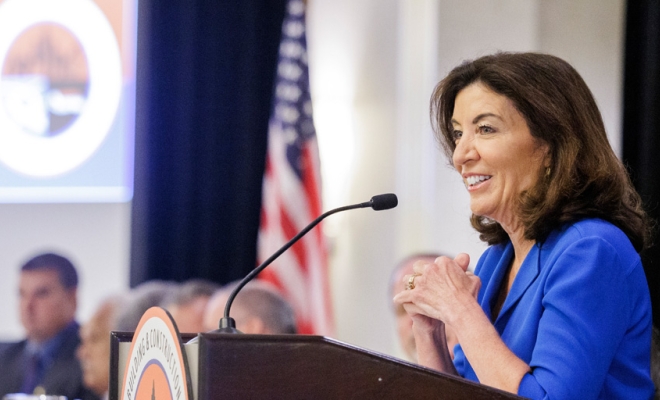 VIDEO of the event is available on YouTube here and in TV quality format (h.264, mp4) here.

AUDIO of the event is available here.

PHOTOS of the event will be available on the Governor’s Flickr page.

A quick transcript of the Governor’s comments is available below:

It’s great to see my brothers and sisters in labor. Gary, first of all, how do you get a unanimous election? Congratulations. Congratulations to you and the entire board on your election here today. And as someone who has been through 14 elections, I know there are serious issues, but it’s great to see your success and the faith your members have in your leadership. And really the unification of our state — upstate and downstate under one New York State Building Trades umbrella is powerful.

It really is powerful when you speak for the entire state. I would like to unify our own state politically in that way. So maybe we can get some pointers from Gary on how that magic happens. But thank you, Gary LaBarbera for being a leader, but also a friend. A friend to me during, yeah, some tough times and some battles and you know, if he doesn’t kill you, he makes you stronger. No one is stronger than me after getting through my first round of budgeting, but I always had the job on my heart because it’s so important that we as leaders stand up and fight for you like you fight for us every day. So thank you everyone here.

Also, I want to once again congratulate Al Catalano for being elected as Secretary Treasurer. Mario Cilento is also here. This guy travels the state as much as I do, and that’s quite a statement. Mario and I sat down together in New York City a couple of days ago and really talked about the challenges facing the labor movement.

I know Sean McGarvey is here. The whole president, the big guy is here. So please make sure we all keep our act a little clean, so it says good things about us here in New York State. And Sean, it’s also great to see you one more time.

And my partner in government, Roberta Reardon, am I not lucky to have her by my side? She is a voice for working men and women in many powerful ways. Fighting wages, making sure people get their unemployment benefits, making sure we take care of people, especially during the pandemic. And I’ll never forget this Roberta, how you had a foot operation that went from maybe a couple thousand unemployment claims a week to tens of hundreds of thousands, I don’t know what the numbers were. It was amazing what you had to deal with. It was a cataclysm that this state was going through and you responded, and I want to thank you and your team for helping us get through those really tough times. So, Roberta Reardon.

Also, our Senate Labor Community Chair, Jessica Ramos, is here. Jessica, nice to see you too. I’ll go to your district after this. I don’t know how to get you there, so you can take a walk. Because you’re always working and I want to thank you for that.

A couple of things, and Gary hit on some of the priorities that I have and I’ve heard from your acceptance speeches, is that you guys are partial to shorter speeches. I could say that. You get more points the less you say, but I’ll just give you some very honest feelings about all of you and what this move means to me, personally. I have shared this with several of you, but we all come from other people who came before us. I mean, none of us were born here.

We come from our parents, our grandparents and people usually started very far away. They came out of great poverty, many times, like my grandparents who left Ireland. And they came here with literally nothing on their backs as teenagers. And they worked hard when… Grandpa worked as a migrant farm worker in the wheat fields of South Dakota. And then they heard that there were jobs as housekeepers in Chicago, and they had terrible circumstances where they were abused and ended up going out in the middle of the night in Chicago. They were looking for a place, a place called Lackawanna, New York, where steel could be made. And that steel industry, the Bethlehem Steel Plant, lifted not only my grandparents out of poverty and into the middle class, but thousands of other people. And people were making the auto parts and people were in the unions, like my uncles who are plumbers and longshoremen and ironworkers. There is so much pride in my family that all of our relatives have lifted themselves out of poverty because they had that union card. That union card was the ticket to the American Dream, then and to this day.

So, that’s why my grandparents inspire me. My father worked at the steel plant. He and my mom lived in a trailer park in the shadow of that steel plant. I was literally there a couple of days ago, because I always go back to that neighborhood. I go back to the small restaurant, actually I went to the ice cream parlor my parents used to go to, in a neighborhood that is still a bit difficult where people are struggling.

And all I want to do is give everyone in that community, down to the five boroughs, upstate and downstate, give everyone an equal opportunity to have a great life, and take care of their families, and maybe send them to college or bring them into the union because I want those opportunities to be available to everyone. Everyone deserves to have what I had. And that means we’re supporting apprenticeship programs. I believe in them to the core. I have walked the floors and seen how people’s lives are transformed. Women learning to be electricians at a New York City location, non-traditional opportunities for women. They were in line for food stamps, saw a sign and found a way to get this training. And I’ll never forget this woman who says, “Now I can take care of my kids because I got this union card.” That means something, my friends. We will never take for granted the power of union membership here in New York State.

And so, I will continue to honor that. And now as we come out of this pandemic, and yes you all showed up, you kept the building going, you couldn’t Zoom into the construction site, last time I checked. You all showed up and kept building us out of the dark days of the pandemic. And now, as the governor leading this state in this post-pandemic era, I want people to look back at this moment and say, “How did New York get through that? They were the hardest hit. They were the epicenter. We lost.” more people. How did they get over it? And the answer is going to be so simple. They built their way back. They built their way back with union projects. As Gary mentioned, what we’re going to do on the Buffalo Bills, and I don’t know. It doesn’t matter if you’re a fan of the Jets or the Giants, there’s a team that plays in upstate New York and it’s called the Buffalo Bills, okay, so we gotta love all of our teams.

And I’ve taken a bit of a beating for this, but they’re not going anywhere for at least 30 years. No one else could make that deal. They’ll be there so my granddaughter can watch them play when she’s an adult, okay? That is important to all of us. But also, Penn Station, yeah, I’m blocking that thing as fast as I can. Everybody says, “Oh, you’ll never get over it.” Yes, I will do it. “You’ll never get over it.” Yes, I will, look at me. Because I’m so impatient because there are big jobs at stake in the first place. But also, don’t New Yorkers and our visitors deserve a world-class experience that’s more heavenly than hellish? Which is what Penn Station is right now. Everyone working on that project will be able to point to their children and grandchildren and say, “I did that.” Like you can point to the buildings in the skyscrapers and all the projects, and the offshore wind power that we’re bringing in, and the Port of Albany, where we’re making the parts for the wind turbines and shipping them down the Hudson.

See also  Woman rescues a pigeon on a night out in a moving video: "He chose you"

There’s a lot going on in this state. I’m excited. I’m excited because we can have all the great ideas and put the money behind them. And I want to thank President Joe Biden for giving us the infrastructure plan, for getting it to the finish line. Senator Chuck Schumer, the Majority Leader, getting the job done. And you can talk about politics, but actually there are people who want to run for office who didn’t support this. So let’s just put that in there, let’s just put that in there. I support it, because that means money from the Federal Government. To the State, to their pockets, because these are going to be projects of the Union. So let’s build our way back. We are going to be the leaders in the green energy revolution. Yes. I need your support for $4.2 billion, that’s a lot of money. But he realized that for 30 years, per family, that’s a small price to pay for the jobs that will be created. But the fact that you will also be creating a better planet for our children and grandchildren. That’s what union work does. And so, I’m very proud to be your Governor. I am very excited. You can tell I’m excited. It’s early in the morning, but your applause made me feel really good. And I just want to say, thank you for being my friends, my allies, getting me through some tough times, and let’s look back on these days and say, “We got the job done, because unions built our way back.” .”

Thank you all. I appreciate your support.