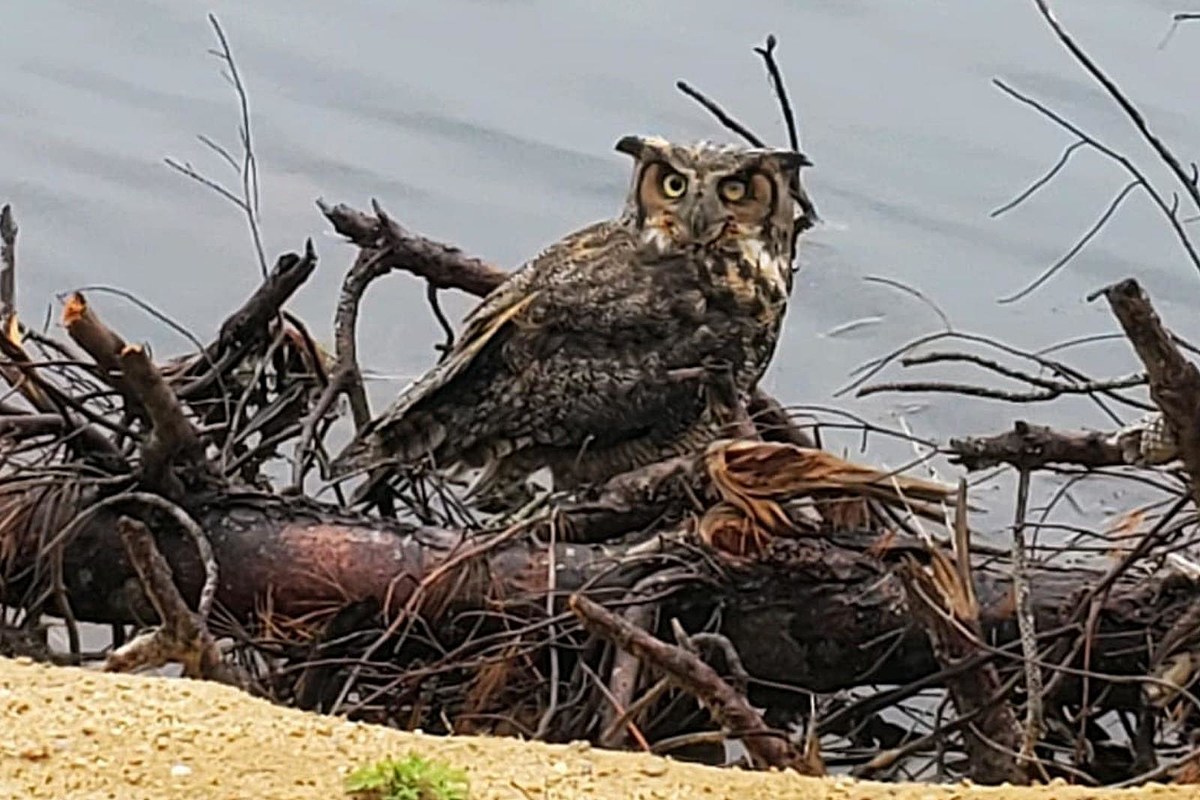 One particular Wareham owl must have a guardian angel in Gavin Bartlett.

Bartlett recently rescued the same great horned owl for the second time in about 16 months, saving him on Sept. 22 after he was sprayed by a skunk and sustained further injuries.

“When he was released back into the wild after he first needed rescuing, they gave him a 50-50 chance of survival,” Bartlett said. “I couldn’t believe it when I saw him on the field (Thursday). I never thought he would make it.”

Bartlett works for AD Makepeace, and part of his job every day is checking out the wetlands on the 500 or so acres he’s in charge of. One morning in May 2021, she was checking out the swamp when she saw an owl on the side of the reservoir.

“I went over to see if it was okay, and it went flying and landed in the reservoir,” Bartlett said. “I thought, I guess I’m going to swim and save an owl, but she was able to get back to shore. She just sat there, and I saw that she had a cloudy eye, and you could tell it was like an infection or something.”

Bartlett called the Wareham Department of Natural Resources and they were able to capture the owl in a net and take it to the Cape Wildlife Center for treatment. The owl’s eye infection was so severe that the eye had to be removed, but it eventually recovered and was ready to be released back into the wild.

See also  Old School RuneScape: all pets and how to get them in OSRS

“They came up to me and asked if I wanted to release him, which I thought was amazing,” Bartlett said. “We brought him back, we opened the box and he flew back to where I found him, and then I never saw him again, until a few days ago.”

Bartlett was checking the property again last Wednesday when he saw the owl sitting on the ground.

“It was the same owl, because the eye was missing,” Bartlett said. “I thought maybe he caught a mouse, so I left him alone.”

However, when he returned the next day, the owl was still on the ground in a different location. That’s when she called the Wareham DNR to come rescue the owl again.

“Six or seven trucks came in and I thought, ‘Wow, this is a huge operation,’” Bartlett said.

The determination was that the owl was likely hunting and was sprayed by a skunk, subsequently flying into a tree.

“(The owl) was checked by officers for visible injuries,” said the Wareham DNR posted on Facebook. “In addition to not being able to fly again, we noted an injury to his leg and he was DEFINITELY sprayed by a skunk.”

Bartlett was stunned to have encountered the same owl twice.

“I’ve never seen an owl in my life, let alone get this close to one,” Bartlett said, noting that he has had to rescue loons, geese and other animals in the past. “To save one and then have it come home, what are the odds?”

What’s next for Wareham’s owl?

Although the Wareham DNR stated that the owl will “hopefully make a full recovery,” Bartlett said he doesn’t think he will be released back into the wild, as he has struggled to survive after his initial injury.

“I think it will probably end up in a zoo,” he said.

What if Bartlett takes the great horned owl home to help make sure he doesn’t need rescuing again?

“I would love to, but I don’t know what the protocol is,” he said.

Massachusetts Wildlife That Can Legally Be Taken Home as Pets

Massachusetts has such diverse wildlife, but also strict limitations on what you can bring home and hug. In fact, there are only certain reptiles and amphibians you can keep as pets (so no raccoons, squirrels, rabbits, etc.) and only two of each are allowed. the state too He says “You can’t sell, barter, or exchange them.” Also, keep in mind that these are wildlife, so it’s probably best to leave them alone and maybe visit a reptile store to get your next pet.

Top South Coast Stories for the Week of September 19-25

These are the most outstanding news of the past week in WBSM.com and in the WBSM application. Click on the title or photo to read the full story.