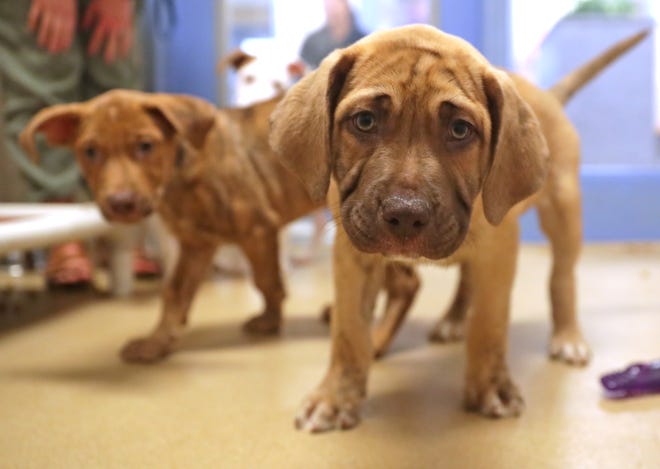 But the ordinance, which seeks to draw attention to the negative effects of puppy mills, will not affect any existing pet stores in the city.

Ald. Nancy Welch proposed the ordinance. It was unanimously approved by the Community Affairs Committee in April.

“What we have before us is what we have under our control within our jurisdiction, and I think we should take action on it,” Welch said during the Common Council meeting.

Under the ordinance, no pet store in the city may “sell, give away, offer for sale, trade, auction, give away, or otherwise transfer or dispose of cats or dogs.”

The ordinance will not prohibit the store from displaying animals from shelters or pet rescues.

The purpose of the ordinance is to encourage consumers to purchase pets from shelters or directly from reputable and responsible breeders. It loosely mirrors a similar ordinance drafted by the Humane Society of the United States.

Puppy mills, which typically raise large numbers of puppies for sale, have long been criticized for having inhumane conditions for animals.

A 2021 report from The Humane Society There are an estimated 10,000 puppy mills across the country, many of which are neither inspected nor licensed.

Ald. Joseph Makhlouf voted in favor of the ordinance.

“I don’t see the need for a pet store to sell them (pets) when there are so many different options for adoption,” Makhlouf said.

Currently, only four other municipalities in Wisconsin have a similar “Pet Humane Ordinance” on the books: Beloit, Whitewater, Appleton, and Fort Atkinson. More than 400 municipalities in 30 states across the country also have similar ordinances.

“I think it’s important for us to make a statement about how we want pets to be treated,” Ald. Margaret Arney said at the council meeting.

The Common Council voted 14-2 to approve the ordinance, with Ald. Mike Morgan and Amanda Fuerst voting against its approval.

Fuerst and Morgan discussed a letter the city received from The Pet Defense Networkwho urged the council not to approve the ordinance.

The organization argued that the ordinance would negatively affect responsible pet breeders and pet stores. He also said it could lead more people to the black market for pets.

“While pet retail bans are well-intentioned, they will not stop bad breeders who are unregulated, unlicensed, and not held accountable to any standard of animal care,” the letter said.

That argument persuaded Morgan and Fuerst enough to vote no on the ordinance.

“While I fully respect both sides and hope it passes, I am voting against it simply for that reason,” Morgan said of the letter.

No stores in Wauwatosa are currently affected.

Currently, no pet stores in Wauwatosa sell dogs or cats, but the ordinance would prevent any future pet stores coming to Wauwatosa from profiting from the sale of cats or dogs.

Wauwatosa City Attorney Alan Kesner said the city currently has no ordinance that explicitly prohibits puppy mills in city limits, but it does have ordinances that require the humane treatment of animals.

A similar state bill, proposed in 2019, that would have banned the sale of dogs or cats in pet stores, did not pass.

That bill, which was supported by the Wisconsin Humane Society, sought to decrease the demand for animals from puppy mills. Instead of selling cats and dogs, stores would be mandated to work with animal rescues and humane societies to host adoption events under the legislation.