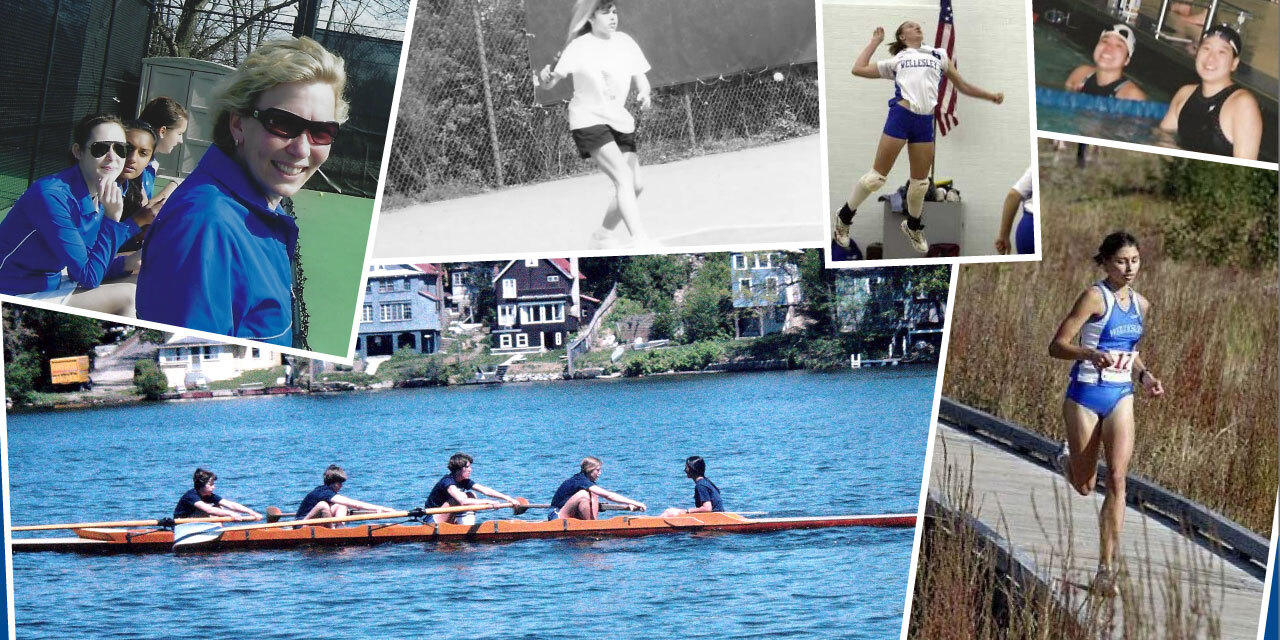 Multiple All-American honorees, holders of numerous Wellesley program records, an Olympic team qualifier, a set of identical twins, and four “angels” (and their helmsman) — these are the 11 alumni and one former coach who will be honored at a induction ceremony Oct. 22 for the Wellesley Athletics Hall of Fame, representing the 2020 and 2022 honorees. View a live broadcast of the ceremony at 6 p.m. Eastern time. Established in 2014, the biennial awards celebrate the spirit and achievements of Wellesley’s academic athletes and those who have inspired and supported them.

“Wellesley has been represented by student athletes who have done great things for generations, and we hope our current student athletes recognize that they are now a part of that legacy,” says Bethany Ellis, director of athletics.

Lia Galanis Economou ’94 Incorporated in 2020 / Tennis
A NEW8 Women’s Tennis All-Conference selection in singles and doubles in both 1990 and 1991, Lia Galanis Economou ’94 helped the Blue win titles at the NEW8 Tournament in both 1990 and 1991 and was selected as the NEW8 Women’s Tennis Athlete of the Year in 1991. Wellesley posted records of 18-4 and 15-3 during Galanis’ first two years with the team, earning him a team invite to the NCAA Championship in 1991. Galanis earned an individual selection for the NCAA in 1992 after winning the Rolex Intercollegiate Northeast Division III Championship. and ranking as high as No. 5 in doubles and No. 9 in singles. A three-time All-Seven Sisters selection, she helped lead Blue to the Seven Sisters to the title in 1992.

Jacqueline “Jack” Woo ’96 Inducted in 2020 / Swimming and Diving
Jack Woo ’96, co-recipient of the 1996 Barbara Barnes Hauptfuhrer ’49 Scholar-Athlete Award, qualified for the NCAA swimming and diving championships in the 100 and 200 Back during the 1994–95 and 1995–96 seasons. Woo earned NCAA All-American honors in the 100 Back as a senior at the 1996 NCAA Championships before representing Hong Kong at the 1996 EPSON Swimming World Cup, later adding the Olympic team qualifier from Hong Kong to career honours, which also included four in a row. Appearances on the Seven Sisters All-Tournament team, All-New England honors, and numerous Wellesley program records.

Christine Gray inducted 2020 / Tennis Coach
Christine Gray guided the blue tennis program to five NCAA Tournament appearances during her tenure as head coach from 2001 to 2008, winning four consecutive NEWMAC Tournament championships from 2004 to 2007 and Seven Sisters titles in 2002 and from 2006 to 2008. Wellesley was dominant with Gray at the helm of the program, posting three 20+ win seasons as Gray earned NEWMAC Coach of the Year honors in every season from 2004-07. Gray was named the 2006 USTA New England College Coach of the Year, the 2006 ITA Northeast Region Coach of the Year, and was a finalist for the 2006 ITA D3 National Coach of the Year. Conference, and Jenna Mezin ’08 and Hali Walther ’08 earned All-American honors under Gray’s coaching.

1977 Light 4+ Incorporated in 2020 / Crew
The 1977 4+ Lightweight crew of Karen Cunningham Van Adzin ’79, Kim Cooke Himmelfarb ’77, Eleanor Horrigan Spyropoulos ’80, Polly Munts Talen ’77 and Cox Elizabeth “Ping” Pingchang Chow ’79 is the first group of members in the team/relay category in the Wellesley Hall of Fame. The 1977 Lightweight 4’s captured first place in the Women’s Eastern Association of College Rowing Lightweight sprints, a first in Wellesley Crew history. The “Ping Angels” went on to the Women’s National Rowing Association National Championships and finished fourth nationally in the open championships that included not only varsity teams, but also competitors from the top club programs in the country.

Alison Mostue ’03 Inducted 2020 / Volleyball
Alison Mostue ’03 led the blue volleyball team during one of the most successful stretches in program history, helping the team to four straight NEWMAC titles while garnering national, regional and conference attention. A two-time AVCA All-American and NEWMAC Player of the Year, Mostue was the 1999 AVCA Freshman of the Year and earned AVCA and NEWVA Regional accolades during her career. She finished her career with 1,352 kills and 1,072 digs while helping the Blues win three straight NCAA regional championships from 1999-2001, including a Final Four appearance in 2001.

Tracy Bassett ’06 Inducted 2022 / Cross Country
Tracy Bassett ’06 received the 2006 Barbara Barnes Hauptfuhrer ’49 Scholar-Athlete Award. A Division III All-American in 2004, the cross-country standout was a two-time NEWMAC runner of the year, a four-time NEWMAC All Finalist -Conference and All-New England, and three-time individual qualifier for the NCAA Championship, earning a trip to national competition in 2003, 2004 and 2005. He earned Coaches Association Division III All-America academic honors Cross Country in 2002, 2003, and 2005 and NEWMAC All-Academic honors in 2003 and 2004. On track, she remains the Wellesley record holder in the 1500 m indoor with a time of 4:44.27 set during the 2003-04 season.