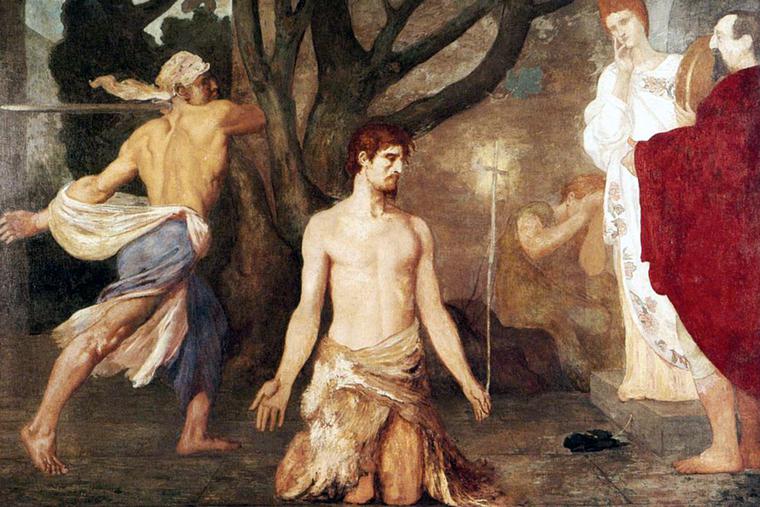 What I love most about John is that he was a passionate and courageous follower of Jesus and died to bear witness to the truth.

I have always loved Saint John the Baptist very much, largely because the connection between him and Jesus is so strong. The Gospels tell us that Jesus is the light that comes into the world, and they also tell us that John was sent to bear witness to this light. He and Jesus are cousins, first meeting as babes in the womb. Most of all, I love John because he was a passionate and courageous follower of Jesus, and he died to testify to the truth.

One of the most moving passages in the Gospels occurs when the Archangel Gabriel visits Mary and tells her that she will give birth to a son and will name him Jesus (Luke 1:26-38). The angel also tells her that her cousin Elizabeth, who is past childbearing age, is already six months pregnant! Maria immediately rushes to visit her cousin, no doubt to share the news of the angel’s visit, and also to witness this other wonderful pregnancy. As soon as María arrives, Isabel greets her in the most lyrical way: “Blessed are you among women and blessed is the fruit of your womb!”

Elizabeth says that the baby in her own womb prompted her to speak, and this baby, of course, is John. Elizabeth adds that at the sound of Mary’s voice, “the child jumped for joy in my womb.”

This first meeting between John and Jesus is a compelling testimony to the preciousness of life in the womb. After all, an unborn baby is the first to express joy at the presence of the Messiah! Mary stays with Elizabeth for about three months, so it is very likely that she was present at John’s birth, as was the Child Jesus in her womb. From the beginning, John was blessed in a very special way.

We are told that John lived in the desert, and he sounds like one of the earliest hermits, living a basic existence and devoting himself to prayer. Living in the desert meant enduring harsh weather conditions and fending off wild animals. It meant living without home cooked meals, shelter, and easy access to water. Not surprisingly, some people thought John was demon possessed, since he dressed in animal skins and ate locusts and honey instead of food and wine.

John certainly didn’t mince words as a preacher. He called his listeners a “generation of vipers” and warned them that trees that did not bear good fruit would be cut down and burned. When people asked him for guidance, he spoke of generosity: sharing his clothes and food with others. He told the tax collectors to stop the ugly practice of scamming people out of money, which was going into their own coffers. It seems that John was such an impressive preacher that some people thought he was the Messiah, until he straightened them out. “One mightier than me is coming. I am not worthy to untie the straps of his sandals.

When John is in Bethany and sees Jesus walking, he shouts: “Behold the Lamb of God, who takes away the sin of the world.” Just as he recognized the Messiah in the womb, John now makes a public testimony of Jesus as the Savior of the world. The next day, John praises Jesus again, and his words inspire the men nearby to follow Jesus and become his apostles.

John’s habit of telling the truth caused him to be thrown into prison by King Herod, who had married his brother’s wife, Herodias, after she and the brother had divorced. John did not hesitate to tell Herod that this was not a legitimate marriage, and as a result, Herodias hated John.

While John was in prison, Herod threw a lavish birthday party attended by the leading men of Galilee. After Herodias’ daughter Salome performed a dance that delighted him, he impulsively promised to grant her any wish. The girl’s bloodthirsty mother told her daughter to ask for John’s head on a platter. The king was “deeply distressed,” as he should have been, since he considered John a holy man, but he was too cowardly to back down in front of everyone.

And so the horrible promise was fulfilled, and soon the bloody head on a plate was handed over to the girl, who handed it over to her mother. There is only one line that mentions Jesus’ reaction to John’s death, but it is full of emotion. “When Jesus found out, he withdrew alone in a boat to a deserted place.” On other occasions, Jesus went to quiet places to pray, so it is likely that he now sought solace in prayer. Since he wept when his friend Lazarus died, I imagine Jesus also weeping over the terrible and senseless loss of this holy man.