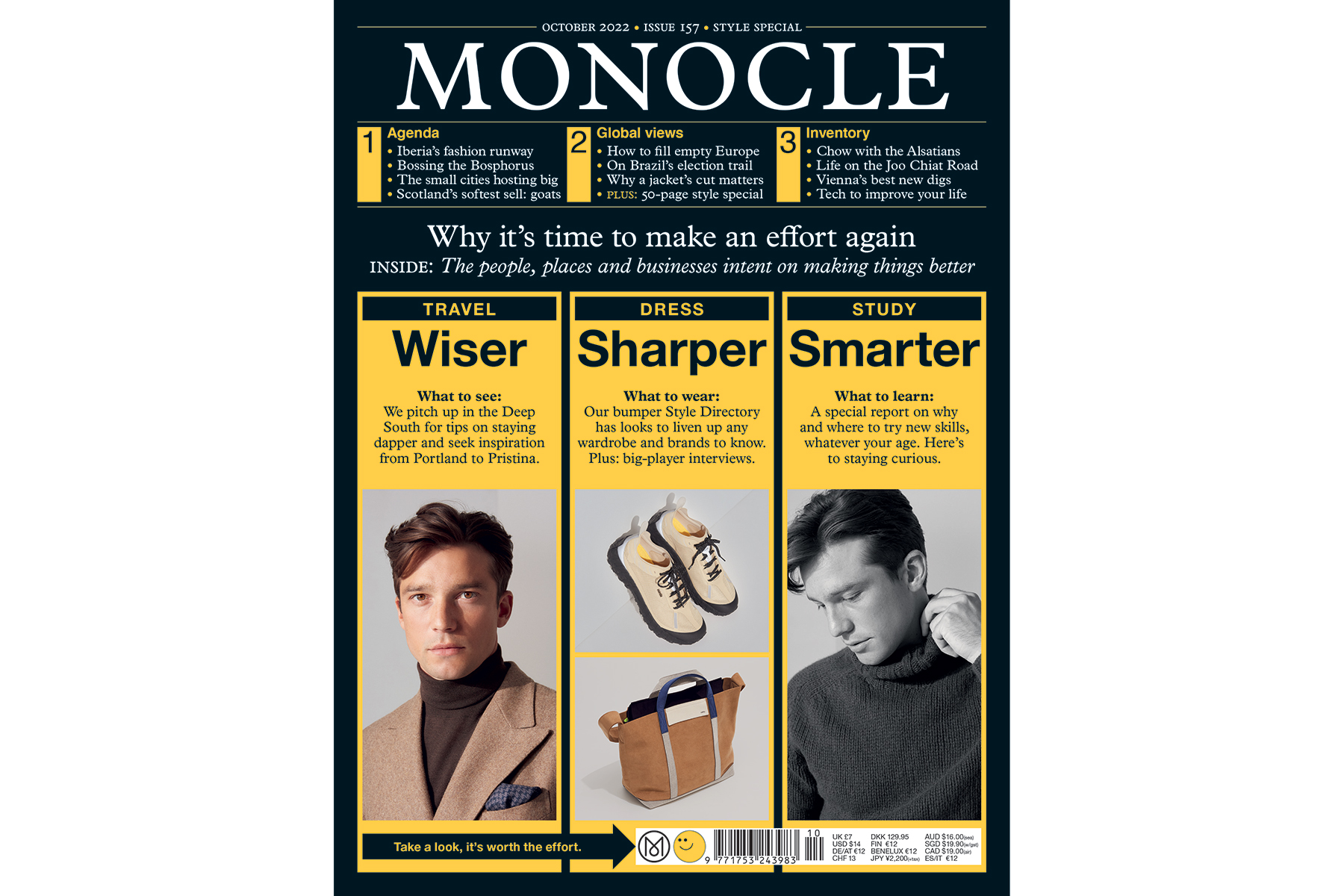 A stylish global affairs and lifestyle magazine, Monocle was founded in 2007 by a diacritically adventurous Canadian named Tyler Brûlé, with publishing operations based in Zurich and London. He thinks of it as The Economist satisfies Timothy McSweeney Quarterly Concern satisfies GQ. There are Monocle Shops in cities like Merano and Hong Kong (but not Dallas), where discerning men can pick up a pair of walking shorts for 420 euros. And the brand hosts an annual two-day “summit” called The Chiefs, described as a “unique global gathering for the sharpest minds in business… to share practical advice on running business.” The Chiefs was last held in St. Moritz; this month, it’s coming to downtown Dallas.

Our first thought: those must be some nice walking shorts. Quickly followed by: Dallas isn’t exactly St. Moritz. Brûlé will co-host the concert with his editor-in-chief, Andrew Tuck. We phoned him to explain how he chose our humble town.

Until November 20
The pop-up shop will last a few more weeks after the conference, offering its collaborations with Comme des Garçons (fragrances) and Japanese specialist Porter (luggage). There are also exclusive pottery and own-brand cashmere accessories.

“I’ve been to Dallas a couple of times in the last few years,” he said from Lisbon. “I did a tour in March. This is the remarkable thing: we have never done an event in the United States. So we’ve been looking, and I was in Miami, then I was in Dallas, and then I was in Los Angeles, too. I was intrigued by the progress of companies moving there. I liked the energy. And then I think there was something refreshing about it, maybe because I came from my homeland of Canada, which was still in a very, very strange COVID place, but it was just refreshing to come to Dallas, where everything was relaxed and felt pragmatic. , and felt that people could make up their own minds about what they wanted to do instead of babysitting. And on top of that, being very direct and commercial, you’re also in a publishing business, it’s a bit of Dallas that chose us as well. It’s good to be asked.”

He was referring to Shawn Todd, developer of The National, which houses the Thompson Dallas hotel, where nanny-less bosses will rest for the night. We asked Brûlé in mid-September how ticket sales were going. He declined to provide details, but said, “I predict there will be a large contingent from Des Moines because we had our conference in Paris in June. I was surprised by how many people from the Des Moines insurance industry showed up.”

We in Dallas say: bring in the Des Moinesians. DesMoiners?

This story originally appeared in the November issue of D Magazine with the headline, “Euro Visitors”. write to [email protected].

Get the FrontRow Newsletter

Get a front row seat to the best shows, arts, and things to do in North Texas. Never miss a beat.

Tim is the editor of D Magazinewhere he has worked since 2001. He won a National Magazine Award in…