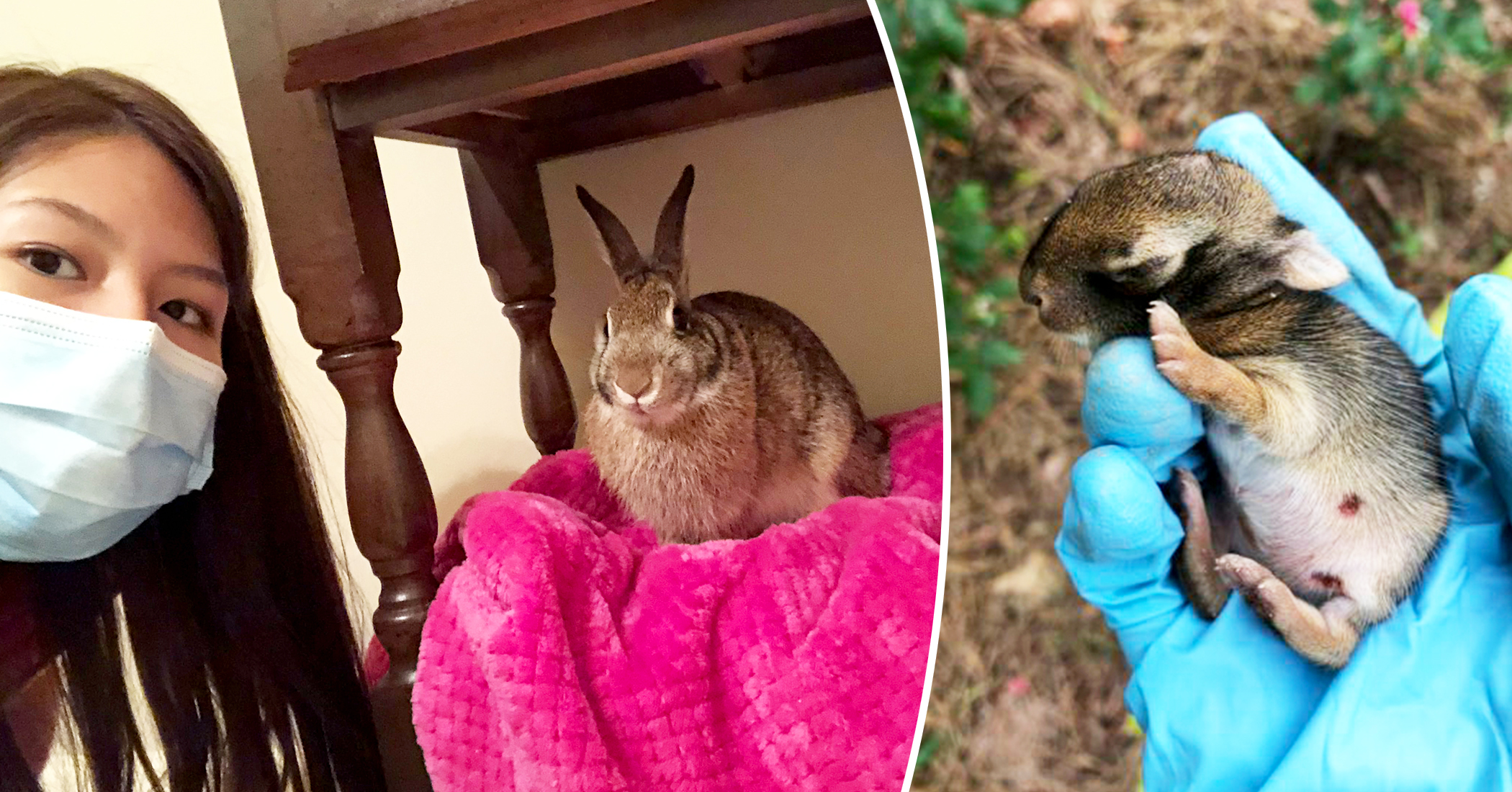 A wild rabbit, orphaned as a baby, got a second chance at life when she was taken in by a loving woman. Months later, he re-entered the wild, but has since reappeared in his savior’s backyard, showing that he is thriving.

Jessica Lee, 25, of Marietta, Georgia, found a baby cottontail rabbit, Honey, crawling on pine straw in her backyard on June 28, 2020.

“I put on some gloves and cradled her in my hand, and she rubbed her head against my fingers,” Jessica told The Epoch Times. “Eastern cottontails are born blind and deaf, so she probably thought I was her mom.”

Miami native Jessica spent 10 minutes searching her yard and researching online what to do when finding a baby rabbit, before finding a nest of rabbits and two additional baby bunnies, sleeping.

He put the rabbit he was holding back in the nest and thought that would be the end. The next morning, however, the three babies were still there, alone, looking worse than they had the night before. At that moment, Jessica thought that her mother had never come back to feed them.

The public health professional made an “X” over the nest with paper and sprinkled flour on the ground to see if the area would be disturbed at night. The next morning, the paper and flour seemed intact, but the bunnies were missing.

“I got frantic,” Jessica said. “I started looking around the perimeter and found them in my backyard grassy area. The three rabbits managed to get out of the nest, which means that they were hungry and without eating. So I decided that the mother rabbit had abandoned them and I took them in.”

The bunny she had held in her gloved hands two days earlier was now frail and emaciated, Jessica said. She contacted a wildlife rehabilitation expert, but they were located too far away and weren’t accepting new wild rabbits at the time, so Jessica began researching how to care for baby cottontails.

She started with a much-needed meal, buying kitten milk formula, mixing it with goat’s milk, and feeding each baby by dripper every three to four hours.

“It was a long process because I had to be very gentle and slow to avoid aspiration,” Jessica explained. “After feeding, I heated a cotton ball with warm water and patted each bunny’s bottom to stimulate them to urinate and defecate.”

This was necessary to promote intestinal flow.

Then Jessica learned that sadly only 10 percent of orphaned rabbits survive more than a week.

When Honey opened her eyes, Jessica added hay, green leafy vegetables, pellets, blueberries, and oatmeal to her diet, and weaned off formula. She took the 2-week-old rabbit out into the wild every day and watched him gain strength and confidence, eating grass and running around the garden.

Although the process was extensive, Jessica said it was rewarding.

As the bunny recovered, the bond with her savior intensified.

“I would wake up every day and shower her with love and affection,” Jessica said. “She was like a little pet, and I became very protective… I think she identified me with the smell and knew that I was the one who saved her. She was skittish around other family members, but not me.”

Honey, occupying Jessica’s covered patio, fed from Jessica’s hand and jumped into her lap. Lifting her was “next to impossible”, but Honey liked to be carried and she enjoyed her exploration of her.

“It allowed him to come in and run around the house,” Jessica recalled. “She was running around the room dodging furniture like she was in an obstacle course. It was very cute”.

Jessica also made it a point to sit on her patio every day and spend time with Honey, who liked blueberries and Quaker oats, petting and bonding with her.

When Honey was 2 months old, she started kicking the screen door in the garden. Jessica decided that the time was right to begin gradually releasing her.

On her first solo outing, Honey stayed 5 feet from the open door and then stepped onto the porch.

The next day, Jessica placed her in the middle of the yard in a small animal cage, and Honey looked around and then quickly jumped up and started hopping towards Jessica’s house. She ducked under a bush to watch the world go by.

“As the days went by, I could see that she became more confident and more comfortable being outside in her natural habitat,” Jessica said. “I would still keep her in my yard at night, but during the day I let her out of it so she gets more used to feeding on the grass.”

Jessica built Honey an outdoor rabbit hutch to keep her safe from predators like hawks and snakes. By the time Honey was 9 months old, she was enjoying the outdoors more.

On March 31, 2021, Honey was seen pushing her head against the screen portion of the door and touching it. She even used her body to push the door open. When Jessica let her out, she walked away from the house. Jessica knew at that moment that Honey no longer wanted to be held captive and that she had to let her go, even though it was an emotional day for her.

But Jessica didn’t have to wait long for Honey’s reappearance. Around dusk of the same day, Honey appeared in the courtyard.

“I called her name, but she kept her distance,” Jessica recalled. “I saw her a week later, then a month later; I would get close to her, but she would stay super still and every time I got too close, she would run away.”

At the time of writing, Honey is 2 years old. Jessica describes her as “silly, playful, but shy” and hopes to see her “jumping around” in her backyard this summer season.

To others who would find themselves in a similar situation trying to rescue a rabbit, Jessica implores, “Only accept orphaned rabbits if you truly believe they are. The mother rabbit only returns at dusk and dawn to feed her young, so the best thing to do is to put the young back in her nest and wait.”

As for Honey, Jessica is grateful that she was able to save a life.

Share your stories with us at [email protected] and continue to get your daily dose of inspiration by signing up for the Inspired newsletter at TheEpochTimes.com/newsletter