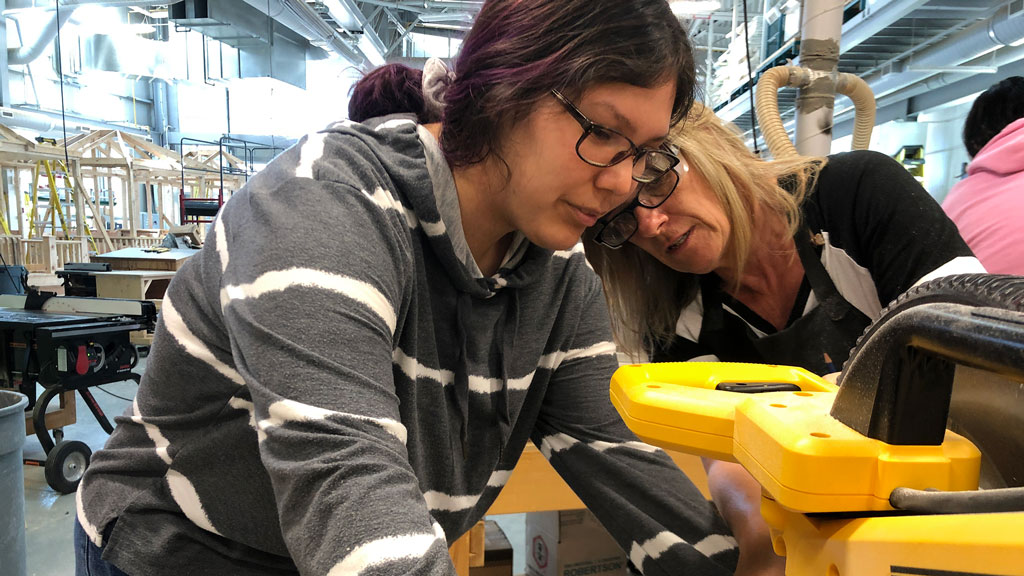 Rarely do women outnumber men in a construction training course, but a three-week basic carpentry class surprised organizers when 12 women and only one man signed up.

Algonquin College instructor Ruth Sabourin was “surprised” to see many women in the class, which is part of the Northern Youth Abroad (NYA) program, an Ottawa-based charity that provides educational and community leadership opportunities for youth in the far north of Canada. .

“I don’t think many of the girls signed up for carpentry class as a primary goal, but they were all interested in learning,” says Sabourin. “It didn’t take them long to get into operating tools.”

During the three-week class, the Inuit and Dene students, who ranged in age from 17 to 24, learned construction safety, how to make layouts and operate power tools, including miter and table saws and routers.

By the end of the course, they had completed three projects, culminating in a doghouse. Working in teams, they learned how to plan their projects first, read drawings, frame, trim and roof, says Sabourin.

“Our goal was to provide a course that students at any academic level could succeed in and complete, allowing them to feel encouraged by their abilities.”

NYA Program Officer Nick Pelletier watched the students go from having limited knowledge of the trade in the first week to understanding wood construction knowledge in the third week.

While many women didn’t enter the program with a view to a career in construction, they came out with construction skills they can use at home, she says.

“Even those women who were hesitant at first (to use power tools) quickly jumped on the idea and found they had skills they didn’t know about,” Sabourin notes, adding that several participants showed great interest in taking the next step in the trade.

It was the first time in southern Canada for many of the students who come from remote communities and often from communities in Nunavut and the Northwest Territories.

For some of them it was a culture shock.

Life in Ottawa and the NYA program at Algonquin College were positive learning experiences for Suupi Idlout, 21, of Resolute Bay, Nunavut.

While he doesn’t plan to pursue a career in construction, he says the carpentry course gave him the confidence and ability to safely complete basic projects around his home.

“I always wanted to learn more about carpentry, but no one told me how.”

The class also gave her the opportunity to work in a team environment, bringing out some of her natural leadership skills.

“I tend to like working alone, but here you had to learn to work with other people…and help them if they needed it.”

She believes that the NYA experience for her and others can open doors to educational and training opportunities in southern Canada that are not available in Nunavut and NWT.

A cabinetmaker by trade, he works primarily at Algonquin College as a support staff, teaching short courses on various subjects.

It was my first time teaching the carpentry class.

“I hope to see some of these students again soon,” says Sabourin. “I enjoyed learning from them as much as I expected them to learn from me.”