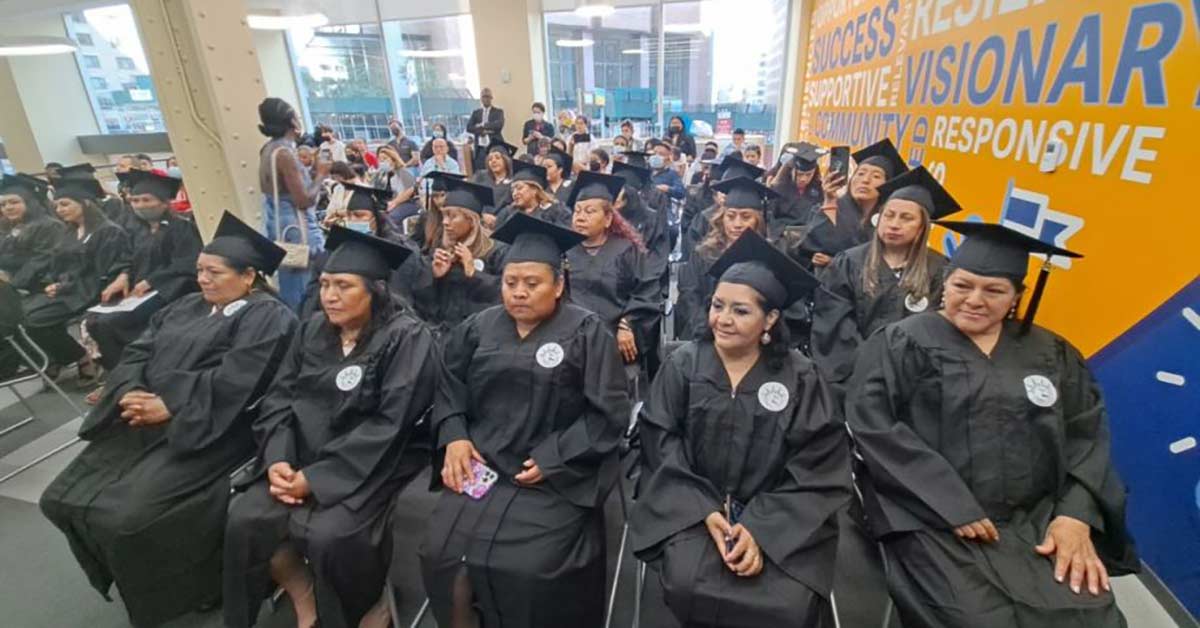 Before Juana Camacho joined Liberty Cleaners, the country’s first women-run worker center, she earned less than minimum wage as a cleaner and felt she had no right to bargain with her employers.

But when she organized with the women in the group, who together learned about their rights, from wages to safe working conditions, her perspective changed.

“I lost my fear,” he says. He began advocating for minimum wage and now works for employers that pay it. “I used my kids to help me negotiate deals and now I can.”

Camacho is one of 50 women who make up Liberty Cleaners, a fast-growing group based in New York City. Labor Justice Project which started four years ago with a few women.

In July, the group celebrated the completion of a one-of-a-kind training program, developed in partnership with the Harry Van Arsdale Jr. School of Labor Studies at the State University of New York, with a focus on green cleaning, technology, and hand working. empowerment.

A few weeks ago, the group started ESL training at the Worker’s Justice Project Williamsburg HUB to support women doing business in English.

“This was a group motivated to see change, organize and grow,” says Maria Valdez, HUB director of the Williamsburg Workers’ Justice Project who runs Liberty Cleaners.

The group was loosely modeled after The United Deliveristsa group of application delivery workers who also organize under the Worker’s Justice Project.

His initial work included OSHA and “know your rights” training, as well as outreach to day laborers who gathered on a street corner in Williamsburg, Brooklyn—known as La Parada—in search of work.

As they continued to organize, the women rejected the title of domestic worker.

“The word sounds like we’re being tamed,” Valdez says. “We thought we deserved a name…we identified ourselves as a powerful group of cleaners.”

Two years ago, approximately 20 women decided on the name Liberty Cleaners and chose the Statue of Liberty as their logo. “Many members of the community are immigrants, and the statue represents change and better opportunities,” says Valdez.

Liberty Cleaners saw a big difference between the informal economy of day laborers and Los Deliveristas Unidos, whose work is mediated by apps.

“The women would pick up the work, and sometimes at the end of the day, the employer doesn’t pay,” Valdez says. “If the employer sees that you don’t speak English, he will take advantage.”

Liberty Cleaners wanted to increase technology education among workers, with the goal of using existing apps and developing an app to search for jobs and ensure fair pay.

They turned to SUNY’s Harry Van Arsdale Jr. School of Labor Studies, which had previously worked with The United Deliverists, to develop a curriculum that covered technology education along with green cleaning and worker rights.

“The idea was to combine workforce development with job education and leadership,” says María Figueroa, dean of the school. She and Liberty Cleaners worked with a faculty member, two university employees, and two consultants to design a curriculum.

The team found that when it came to comprehensive training for the cleaning industry, “there wasn’t a lot,” says Figueroa.

The team divided the training into soft skills and hard skills modules. Topics include cleaning training, with a focus on green products that have fewer health implications, technology basics, safety form filling, negotiation, and industry business principles. They also added advice on self-defense for better working conditions and wages.

See also  Running Quotes to motivate you for your next run

They chose a period of two days to carry out the training at the university. “These two days meant a lot to the women,” says Valdez. “For many of them, they gave up work hours, had to find babysitters, and had to do a lot of juggling.”

Also in attendance was Camacho, the Liberty Cleaners member who advocated for the minimum wage.

“Through the training I learned more about how to negotiate with my employers, how to use green products and about technology,” he says.

The class was an opportunity for the women to talk with each other and with the instructors about their experiences in the cleaning industry, their purpose in doing this job, and skills acquired over the years.

For participant Merced Aguilar, who has been organizing with Liberty Cleaners since the beginning, it was also a way to share the power of organizing.

“I want more of my colleagues to know that being a part of Liberty Cleaners will help them get fairer wages and more respect and dignity,” says Aguilar. “I want others to have the opportunity and learn like I did.”

A total of 50 women graduated from the new program with a formal ceremony, wearing caps and gowns. “It was a special date and I wanted the women to be proud,” says Valdez.

She and Figueroa hope to continue the partnership and turn the curriculum into an accredited course and apprenticeship program. “It can become something official that can contribute to some degree,” says Figueroa.

Liberty Cleaners, meanwhile, builds on the SUNY curriculum with twice-weekly ESL classes, including hands-on technology skills, at the Williamsburg HUB to help women do business in English.

See also  Can digital fashion ever be compared to the emotional thrill of wearing clothes? | Fashion

Liberty Cleaners knows the importance of this skill: It’s what allowed Camacho to speak out against employers who didn’t pay minimum wage.

Valdez believes that trainings can be the main strategy to attract new women to Liberty Cleaners; she plans to expand the options if the group receives more funding.

Her dream is to start a collective retirement fund to support the women in the group.

“Liberty Cleaners is here and it’s growing,” she says.

“These are women who have mastered everything they need to face, powerful women who are giving themselves the opportunity to learn.”