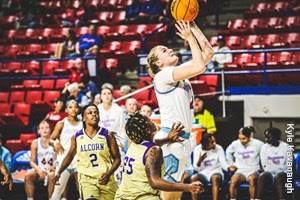 The Louisiana Tech women’s basketball team survived a season-high 24 turnovers to extend their non-conference regular season winning streak to 18 games with a 70-59 win over Alcorn State inside Thomas Assembly Center on Saturday afternoon.

Tech used a 12-2 start to the day thanks to 10 early forced turnovers, but made nine of their own, leading to six quick points for Alcorn State (2-4). The Braves used an 8-2 run to close out the quarter with Tech leading eight, 18-10.

Tech would build its biggest lead of the day (31-13) with 6:22 remaining in the first half of a mackenzie worm jump shot, but both teams would finish the final five minutes without a field goal.

Ann Larr Roberson he made one of his nine free throws on the day with 1:05 left in the half to give Tech a 32-16 lead at halftime. Roberson posted his third double-double of the season with 17 points and 10 rebounds, including 9-for-12 shooting from the line.

Monkfish Sant hit one of his three 3-pointers en route to a season-high 13 points to give Tech another 18-point lead, but Alcorn State began its second-half charge with a 7-0 run in 90 seconds to the four minutes. and cut Tech’s lead to 10 late in the third, 47-37.

The game reached single digits twice in the quarter at 50-41 and 53-44, thanks to back-to-back 3-pointers by Alcorn State, but Tech’s composure at the foul line in the fourth quarter, scoring 17- 19 in the final stanza, kept Alcorn State at bay in the closing minutes.

keiunna walker Y salma bates he joined Roberson and Sant in double figures with 17 and 10 points, respectively. Walker and Bates combined for 14-15 from the line and were responsible for the Techsters’ final 11 points.

Tech stayed below 40 percent shooting for the second time this season, but held opponents below 38 percent for the sixth time and forced 21 turnovers with plus-15 on the boards (38-23).

The Lady Techsters are now just four wins away from the No. 600 at Ruston.

QUOTES
Coach brooke stoehr…
“I thought there wasn’t a lot of flow in the game with all the turnovers and fouls, it was very choppy. That being said, I thought we defended and rebounded very well in the first half, but we didn’t do a good job guarding the ball. We didn’t defend as well in the second half, but we did a great job at the free throw line to close out the game.

I feel like we take a breath and relax. You have to give Alcorn credit for continuing to play and fight the entire game. Winning is hard, it doesn’t matter who you play or where you play, so it’s good to come away with victory. We’re excited about that and proud of our team for pulling it off, but we’re going to have to go back, focus and clean up a few things to get ready for Vanderbilt next Thursday.”