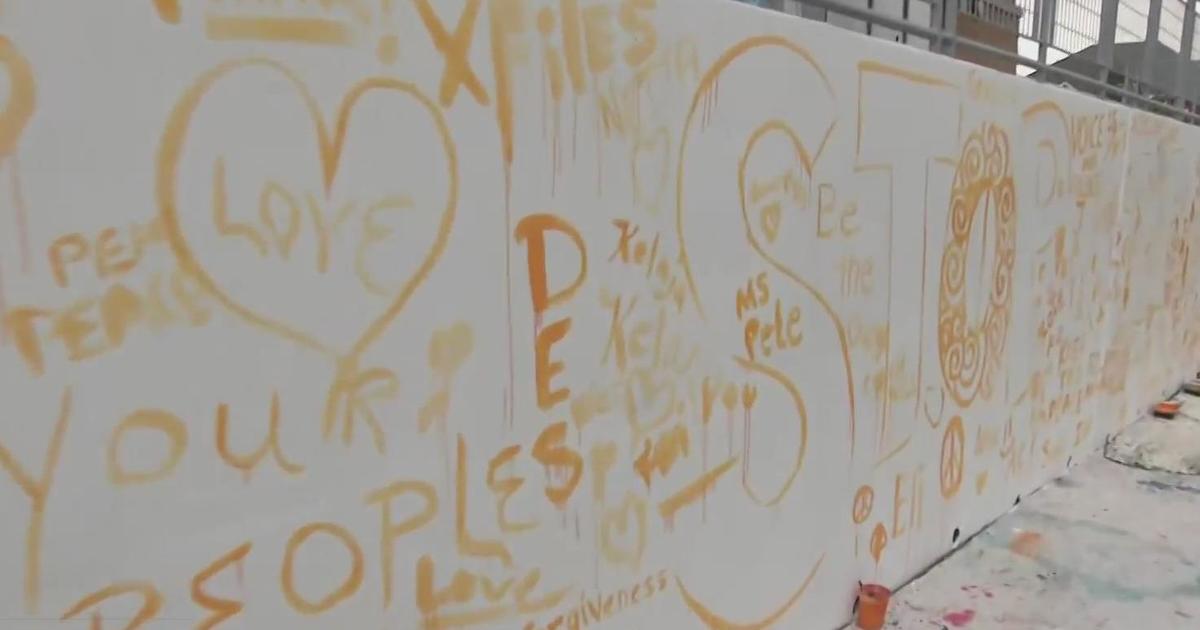 PITTSBURGH, KDKA — The largest mural in the Pittsburgh region is in the works, and you can help create it.

By fall, art will cover most of Salem’s Market and Grill in the Hill District, where Shop-n-Save used to be.

The Morant children left their lasting mark at the community event on Saturday. Sixteen-year-old Jerome Morant said: “I painted my name because it’s important to show people how much you care about the community.”

His sister, Shayae, 19, said: “I put my name because this is my neighborhood too.”

And her younger brother, Jael, said, “It’s so amazing because every day I’m going to be here, I’m going to look at this wall. I’m going to imagine tons of wonderful things about my brothers.”

The mural began with “End Gun Violence” and grew organically as children, police officers, and people in the community added their own messages and symbols.

Artist and Wilkinsburg native Kyle Holbrook creates murals all over the world. He is touring all 50 states to raise awareness of gun violence and brings his message of peace to Pittsburgh.

Teenager Samaya Thomas, who helped paint the mural, said: “We all have the same complexion, so it affects us all. And we’re all sad because a lot of people in my family have died from gun violence, so it’s hard.”

Holbrook and artists from around the world will add their own designs to the mural depicting the history of the Hill District with QR codes for more information.

The community hopes that art can be the beginning of a better future.

Destiny Brown, a Hill District teenager, said she hopes art heals “by getting people to listen more, talk about it more, experiment.”

Holbrook knows that art cannot stop violence, but it can be a powerful symbol and inspiration for change. And the act of doing it together is the beginning of that.

Jerome Morant, 16, added: “We are a community. It’s good to care rather than go against them.”

This was the first of three community days at Salem’s Market and Grill where anyone can come and help create the mural.

You can join the community on August 21 and September 17 from 1 pm to 6 pm They welcome people of all ages, all races and from all over the region.

And if you are a visual or performing artist and would like to contribute to the project and the events around you, officials will be receiving submissions through July 25. Email [email protected] for information to apply.

And you will find more positive things for the children of our region. here.

See also  5 things you should know about the UN Oceans Conference, an opportunity to save the largest ecosystem on the planet |