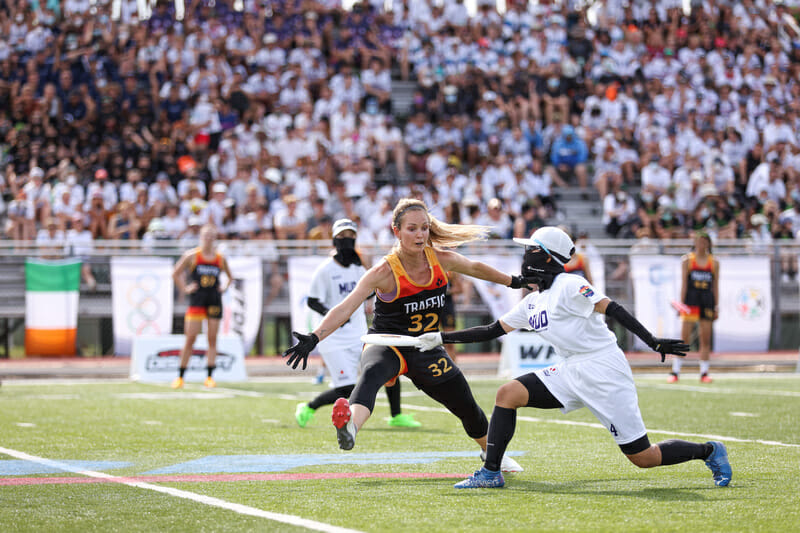 The week’s opening events in Cincinnati did not disappoint.

One hundred twenty-eight teams from 30 countries gathered at Atrium Stadium in Mason, OH, for the opening ceremonies of the 2022 Ultimate Club World Championship on Saturday. Featuring the traditional parade of flags, spectacular aerial theater and a high-octane exhibition game between Traffic (CAN) and MUD (JPN), the opening ceremonies were, in many ways, a great return to play for the international ultimate community. .

After a successful run to both the Masters Ultimate Club World Championship and the World Games in the last month, the triumphant return of the ultimate international in the post-COVID era appears to finally be upon us. Players were free to mingle and chat, old friends reconnected, and despite being inactive for three years, the competitive spirit is certainly alive and well in Cincinnati.

Upon entering the venue, fans were treated to a carnival of activities. A speed gun was installed for players to test how fast they could throw a puck. Free snow cones were handed out to players (which, in the humid 90°F heat, was a welcome treat). The line for the merchandise store wrapped around the bleachers and disappeared down the cart path beyond. In short: the place was packed, the players were excited.

Passing through the bazaar, the stands that stretched around the soccer field were filling up long before the official start time. The teams, largely dressed in their club’s matching jerseys, made their way into the stands, huddled with their teammates and compatriots and created a striking collage of colours. Decked out in bright new uniforms, the players covered the stands like sections of a patchwork quilt. Reds and whites from Canada and Singapore. The yellows of Venezuela and Colombia. Seeing the stands packed with so many Frisbee players was almost like a family reunion. For most, attending the opening ceremonies was like coming home after a long time away.

“I thought the opening ceremony was fabulous,” said Isaac Tan of the Singapore Otters mixed team. “Seeing so many teams after four years and the pandemic and other issues, I think it’s great to see so many clubs from all over the world come here and play together again. I am very excited for the upcoming week of Frisbee for all of us.”

The day’s festivities began as most opening ceremonies do: with speeches and awards. This year, WFDF recognized three longtime community members and presented them with Lifetime Achievement Awards. Following this, Great Britain received their award for being the most energetic team in the World Games event last week. Meanwhile, the teams arrived little by little and continued to fill the stands.

The main event of the opening ceremonies was the parade of flags. Unfortunately, because COVID continues to be a concern for attendees, the tradition of teams or representatives parading their flag around the parade ground has been abandoned. Instead, event volunteers acted as national surrogates, hoisting the flags from a safe distance.

As the flag presentation began to wind down, the crowd’s attention began to shift upwards. There, a small speck circled over his head.

It wouldn’t be an opening ceremony without some theater, and Cincinnati did not disappoint. With the US national anthem blaring over the public address system, the attention of all in attendance gazed spellbound at the sky. Flying high above the stadium, three brave souls dove headfirst out of a plane. Adorned with streamers, smoke and an American flag the size of a Winnebago, three skydivers snaked past and around each other, descending from the skies as Bruce Springsteen’s “Born in the USA” blared from the speakers.

The first two skydivers glided gracefully onto the playing field, parachutes billowing behind them, and were greeted with raucous applause. Shortly after was the grand finale. One last member remained in the air, carrying a huge red, white and blue flag in tow. After a few suspenseful moments, they dove, rising inches from the ground and landing so softly that, despite the weight of the physical flag and the metaphorical symbolism it represents, the diver remained firmly on his feet. International broadcaster Tom Styles described the scene, saying, “I thought the banner with stars flying from the sky just set the stage for an all-American event like no other.”

After the pomp and circumstance of the opening ceremonies, the top two teams from Group G of the Women’s Division squared off in front of packed stands with the rest of the WUCC teams to kick off the week’s competition. MUD came out swinging against Traffic, who was seeded into the pool first, looking determined, if also a little anxious.

The first point was one of many throughout the game that saw sloppy play resulting in frequent turns from both sides. MUD eventually scored to stay on serve, though Traffic responded quickly. The Japanese wasted no time getting horizontal with a great design by Shiori Ogawa, and soon the rest train had pulled out of the station. MUD’s offense and defense cleaned up as they settled in, but the Canadians had a harder time finding their rhythm. With a pair down early, Vancouver’s momentum began to shift, and they played catch up to bring it back to 4-4.

The following points were defined by more messy play and unforced turns from both sides as they struggle to move through each other’s zones and focus on the fundamentals. MUD player Yukie Yamaguchi commented on his nervous energy, noting, “Half of the team is very young. For [them] it is the first time they play in this kind of world competition, so they get very nervous [but] they got on well, relaxed, comfortable and confident.”

In fact, the Tokyo team gained confidence, specifically with their deep shots, smart offensive decisions, and aggression on the puck. What they lack in vertical ability, MUD makes up for with their willingness to bid on anything. Shiori Ogawa, Risa Shimada and Kanari Imanishi were some of the most threatening players on the field today, reminding us that international teams should not be underestimated this week.

The traffic had to work to keep up for the first half with some nice hiccups, some impressive, some lucky. MUD held on to take the half at 8-7 on serve and were able to carry their growing energy into the second half with a heavy point that earned them another break. Despite their low energy, Traffic didn’t let MUD get away that easily and we were soon tied again.

See also  Louise O'Neal, who died on September 17, was a Hall of Famer and pioneer of women's basketball - Hartford Courant

The parity was short-lived, however, as MUD finally began to capitalize more on Traffic’s slow defense. The points became increasingly clinical for the Japanese. A remarkable block from Yamaguchi led to MUD’s first break of the second frame and a two-point lead at 11-9. MUD bugs here and there gave Traffic essential opportunities to turn the tide in their favor, but they couldn’t oil their machine in time. The points cycle that arduously ended with a score for MUD became routine as the lead stretched to five and Traffic fell deeper into the energy well any ultimate team knows well. Terry Whitehead, an experienced Traffic player, did her best to give her team the energy boost they needed with an epic layout block and a straight line to the end zone where she caught a dime and put up the score. 14-10. Unfortunately, Traffic’s energy boost wasn’t enough to shut down MUD, who made quick and decisive work of his game-winning point.

MUD was proud to open the tournament as “representative of all Japanese teams […] and happy to play.” Their plan when they face other strong teams throughout the week is to continue to play to their strengths: deep looks and the “every puck is yours” mentality, both of which were key to their exhibition win.

When asked what went wrong, Vancouver coach Matt Doyle summed it up as “trying to do too much with our pitches and [not] running on the looks we were taking instead of taking what was available.” Doyle attributed poor pitching choices to a lack of energy.

Although the result was not what they expected, Traffic saw the exhibition game as “a good opportunity for growth” and they hope to focus on their objectives of toughness and resilience throughout the week.

The exhibition game delivered solid results from two strong teams and serves as an important reminder that every day is unpredictable here in Cincinnati.

Overall, this year’s opening ceremony was short but very sweet. A welcome return of ultimate to the world stage and a great first day for WUCC 2022.